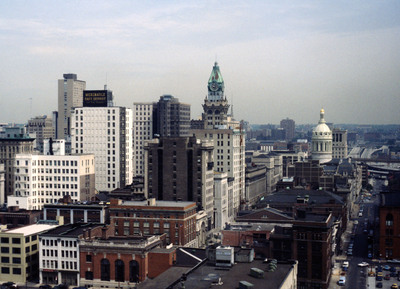 This view of the Baltimore skyline show’s the city in transition during the revitalization process that began around 1970. The 18 story building in the center of the photograph is the Maryland Casualty Company Tower, known locally as the Tower Building. It was designed by Otto B. Simonson and built between 1905 and 1912. Due to problems with the building’s structural integrity it was demolished in 1986. To the right of the Tower Building is Baltimore City Hall.