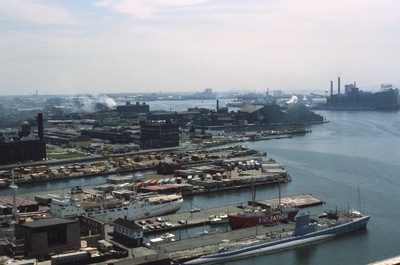 Baltimore’s Inner Harbor has become the cultural center of the city since the waterfront revitalization project launched in the 1970’s. This 1978 photograph show’s the docks before they were developed into the National Aquarium and various commercial enterprises. In the foreground is the USS Torsk,, which became the Maryland Submarine Memorial in 1973, and later was moored in the Inner Harbor along side other historic ships, including the USS Constellation.