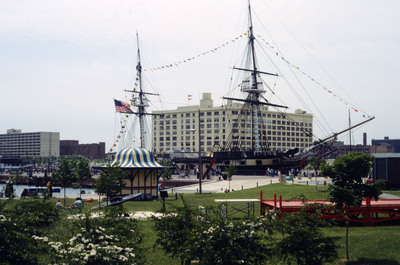 This 1978 photograph shows the USS Constellation at the inner harbor in Baltimore, Maryland. It was moved here in 1968 as part of the city’s revitalization plan. In the 1970’s the Inner Harbor emerged as the cultural center of Baltimore with the USS Constelation as the centerpiece. A lack of funding led to considerable deterioration of the ship over the following decades, and in the 1990’s it underwent major renovations with funding raised by the Constellation Foundation.