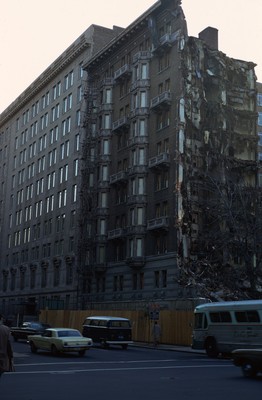 Washington D.C. began a plan to revitalize the city shortly after World War II. The rapid population growth following the war inspired a suburban sprawl into the surrounding areas of Maryland and Virginia. As buildings in downtown D.C. fell to neglect, they were demolished to make room for new developments. The preference for Modernist design, as exhibited in the intact building to the left, also contributed to the demolition of 19th century structures like this early high-rise. Modern design in the mid 20th century favored the space and neutrality of new construction over the renovation of old buildings that potentially could have been restored.