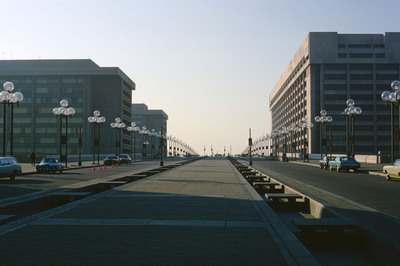 L’Enfant Plaza in Washington D.C. is a complex of several commercial and government buidlings. “La Promenade” shopping mall is also a part of the plaza. Named for Pierre Charles L’Enfant, the man responsible for the design and plan of Washington D.C., the plaza was a part of a project to renew the area that began after World War II.

Unfortunately, the proposed site for the plaza was an older, poor and middle-class neighborhood of Victorian row houses. The project drove families, primarily African American, out of their homes under use of eminent domain. The housing and structures in the neighborhood were demolished and replaced by L’Enfant complex.