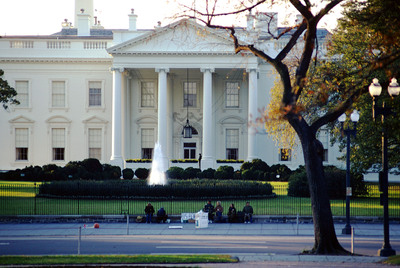 Quakers sit in protest of the Vietnam War outside of the north portico of the White House. Although the Quakers had a long history of promoting peace, it was not until Clarence Pickett of the American Society of Friends founded the National Committee for a Sane Nuclear Policy in 1957 that they became organized anti-war activists.

War protest, common throughout the United States involvement in Vietnam, escalated in the early 1970s. This came after news about the My Lai massacre, the Kent State University killings, and the release of the first installment of the Pentagon Papers, which revealed disturbing details about the war.