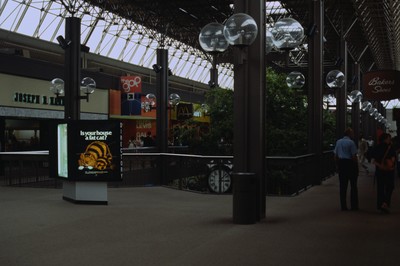 An interior photograph of the Columbia Mall in Columbia Maryland displays the glass ceiling that creates an atrium effect for shoppers. The globe-shaped lanterns are repeated on the mall’s exterior walks.

The Mall in Columbia is part of a planned community development in Columbia, Maryland. The community consists of ten self-contained villages which were established in the late 1960s by The Rouse Company, a development firm headed by James Rouse. The Mall opened in 1971 and served as the centerpiece of the Columbia community.