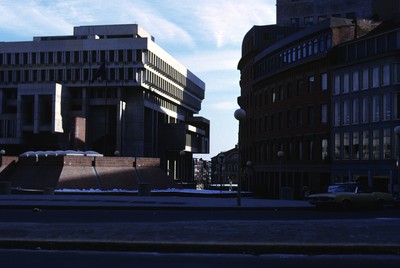 Boston City Hall is the centerpiece of Government Center which consists of both commercial and civic buildings. Construction began on the site in 1963 and was completed in 1969. Kallman, McKinnell and Knowles designed the building. The architects and the Brutalist style design have been criticized over the years, yet they have also been recognized for their departure from conventionality. Recent plans have been proposed for a relocation of city offices and demolition of the controversial building.

Boston City Hall features several art galleries featuring collections by artists who have been recognized for their work through awards and grants, and collections created by community art organizations.