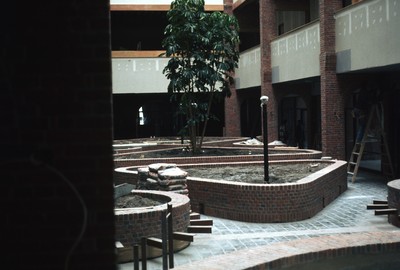 Construction in the courtyard of a building in Boston’s Commercial Wharf, 1976, by the Massachusetts Housing Finance Agency. The MHFA was developed by Mass. legislature in 1966 to be an independent public authority creating affordable housing, rental and for ownership. Certain goals of agencies like these were to promote mixed-income housing and other cross-class relations.