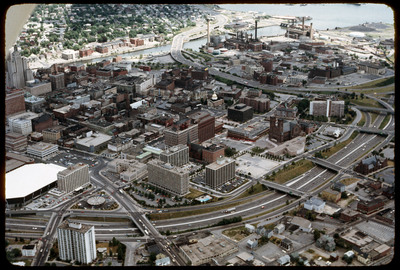 Aerial view looking west by southwest. I-95 junction with I-195. The Providence Civic Center (Dunkin Donuts Center), which opened in 1972 is at the lower left. Buildings in this photograph that have since been demolished include the circular Gulf station, the old police station, the Outlet Company, and the Crown Hotel adjacent to it. The vacant space on Green St. is now occupied by apartments at 4 Cathedral Square and the empty lot at 280 Washington Street became Grace Church Apartments.