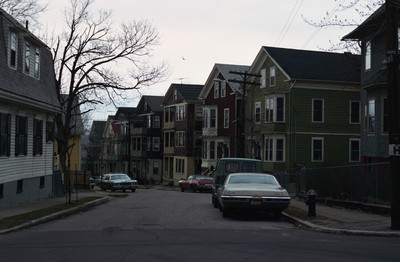 Triple deckers photographed in the Mount Hope neighborhood of Providence. During the later nineteenth century the Mount Hope neighborhood experienced rapid growth due to industrial activity along the nearby Moshasshuck River. Street car lines introduced to the neighborhood in 1875 and 1886 accelerated residential growth. Triple deckers, a staple architectural form in the North East, vary in price and quality, but are distinct in their method of placing three identical units one above the other, usually with a porch for each unit.