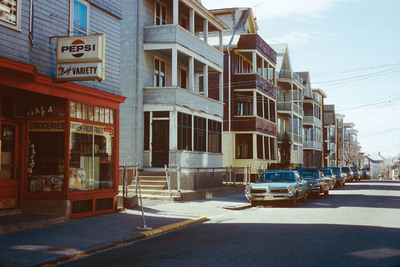 Triple deckers on Fales St in Central Falls. Smolski notes on the slide that this image was taken on a Sunday and that triple deckers lacked sufficient parking. Triple deckers are abundant in New England mill towns. First appearing at the end of the nineteenth century, they provided inexpensive tenement housing for workers. Central falls upon its own worker boom in the textile mills, followed suit.