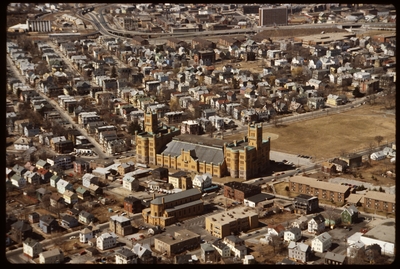 Ebenezer Knight Dexter bequeathed this large parcel to the Town of Providence upon his death. In the 1840s, this was only a 10-acre tract for militia training. At the turn of the century it was supplanted by the new building seen today. It is by far the grandest of four large armory commissions used by William R. Walker & Son, and impressive measured against any United States armory. 235 feet by 165 feet and 90 feet from the floor to the crown of its arching. Abandoned by the National Guard in 1996