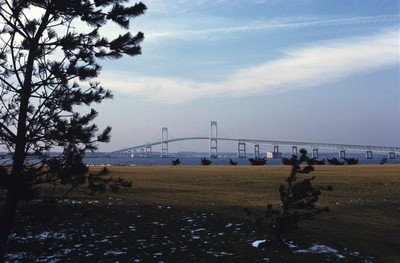 Beginning in the late 1940s, efforts towards the construction of a bridge linking Jamestown to Newport began. From the 1940s on, at least 32 engineering studies were made for possible location of a suspension or cantilever bridge, a tunnel or combinations thereof. The original proposal of 1950, tying a bridge to Newport’s Ocean Drive, was approved by the Navy but not by many local residents. The engineering firm of Parsons,Brinckerhoff, Quade & Douglas, first made famous for founder William Barclay Parsons’ designs of the New York City subway system and the Cape Cod Canal, recommended a bridge from Taylor’s Point in Jamestown to Washington Street in Newport. After the Navy approved the proposal for the design and clearance heights, the line suggested by the firm was used for the location of the bridge.