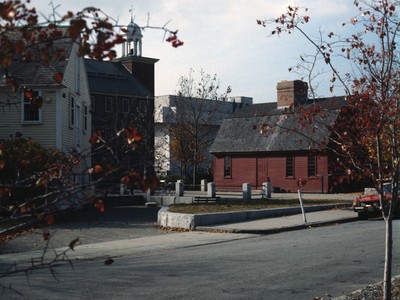 The Old Slater Mill was dedicated exclusively to the production of cotton thread until 1829 and then continuously occupied until 1921 with various owners and renters who altered its physical structure to suit whatever enterprise they brought with them. Beginning with modest dimensions of 43" x 29", the mill was periodically enlarged, reaching its maximum of 140" x 51" in 1920. Through the years, production included jewelers' tools, coffin trimmings, cardboard and bicycles. The demise of the last private owner spurred a small group of local businessmen to organize the Old Slater Mill Association to purchase, restore and preserve the "Birthplace of the American Industrial Revolution" the Old Slater Mill. Between 1925 and 1930, the Association's efforts secured support from 62 individuals and gave them the honor of becoming "founders" of one of the first industrial museums in the United States. Industrial giants such as Henry Ford, Walter Chrysler and Harvey Firestone were not only early supporters of this early industrial museum, but went on to preserve their own industrial collections.