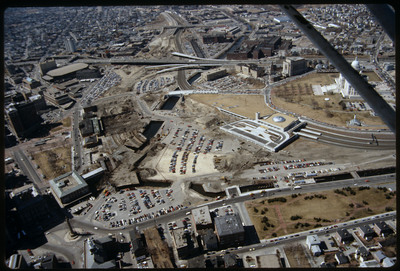 This image shows the transformation of Capital Center in progress. Francis Street construction is complete up until the over-passed train tracks and the bridge over the Woonasquatucket River. The former train tracks have been removed, but the land that turned into Memorial Boulevard is still dirt lot. Similarly, Providence Place Mall is years away from construction, but the paths of the highway access ramps under construction are beginning to suggest its future shape. Providence Station is the only completed element.