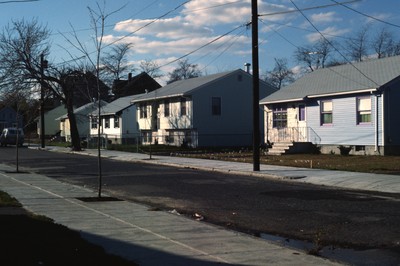 A streetcar added in 1865 ran west along Public Street, and then south down Ocean Street, and would transform the Lower South Side into Providence's first streetcar suburb. In the next ten years, the streets along which the streetcar ran developed quickly. Between 1860 and 1880, as the population of Providence doubled to 104,857, Irish immigrants, which had hitherto been confined further north, began to populate the southern part of Lower South Providence. Because the city of Cranston was traditionally Republican, residents began to fear that a large immigrant population, which overwhelmingly voted Democratic, would undermine its Republican political affiliations. For this reason, Cranston ceded the Lower South Side (along with Washington Park) back to Providence in 1868.