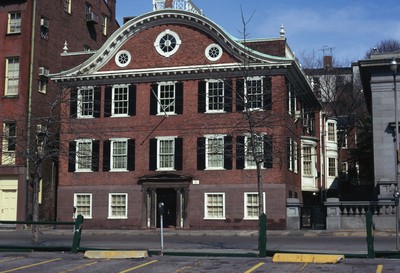 Joseph Brown was one of the four famous Brown brothers of Providence who were heirs to the shipping fortune of their father. Joseph Brown taught mathematics and astronomy at Brown University, but was also an amateur architect. Brown built this home for himself in 1774. The baroque ogee gable Brown designed distinguished the home from others at the time.

After Joseph’s death in 1785, the house remained in the family. Brothers John and Moses formed the Providence Bank in 1791 and used this building as their headquarters. The original entrance was located on what would now be considered the second floor but was relocated to street level for commercial access to the bank.