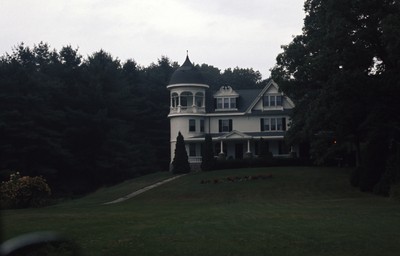 This Queen Anne mansion was built by the Tinkham family. It's position on Sweet Hill, slightly elevating it above Harrisonville Mill, visually demonstrates the lordship-like status of a Victorian mill owner. The three story cylindrical corner with an open aerial gazebo at the top was part of an addition made in 1902. The open turret, dormer, and gable side by side epitomize the stylistic influences that coexist in the details of 1880s Queen Anne architecture: Victorian, exotic, Neo-Colonial classicism, and vernacular (Jordy, 309). Burrillville Rhode Island was once home to a number of successful woolen manufacturing mills in the nineteenth century. The convergence of several rivers as tributaries to the Blackstone River made Burrillville a prime location for mills in the northwestern corner of the state. (date of photograph is approximated)