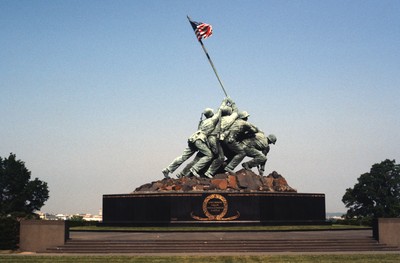 The Marine Corps War Memorial stands as a symbol of this grateful Nation's esteem for the honored dead of the U.S. Marine Corps. While the statue depicts one of the most famous incidents of World War II, the memorial is dedicated to all Marines who have given their lives in the defense of the United States since 1775. The 32-foot-high figures are shown erecting a 60-foot bronze flagpole from which a cloth flag flies 24 hours a day in accordance with Presidential proclamation of June 12, 1961. They occupy the same positions as in Rosenthal's historic photograph. Hayes is the figure farthest from the flag staff; Sousley to the right front of Hayes; Strank on Sousley's left; Bradley in front of Sousley; Gagnon in front of Strank; and Block closest to the bottom of the flagstaff. The figures, placed on a rock slope, rise about 6 feet from a 10-foot base, making the memorial 78 feet high overall. The M-l rifle and the carbine carried by two of the figures are 16 and 12 feet long, respectively. The canteen would hold 32 quarts of water.