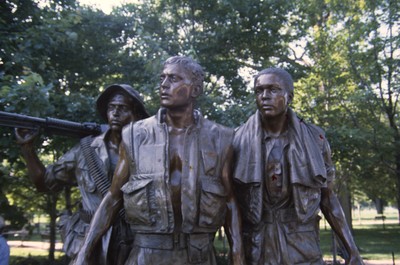 The Three Servicemen statue is the result of the controversy surrounding Maya Ying Lin's design of the Vietnam Veterans Memorial. Some veterans and their political supporters felt that The Wall was "a black gash of shame" or a "giant tombstone." It was too abstract a design for others who wanted a more heroic, life-like depiction of a soldier. To meet these concerns, it was decided that a traditional statue would be added as an integral part of the Vietnam Veterans Memorial. The late Frederick Hart, who had won third place in the original competition, was selected to create a suitable work of representational sculpture to be added to the Memorial site. The statue was unveiled in 1984, two years after The Wall's completion. Comprised of three men carrying infantry weapons, the statue grouping has been called both The Three Soldiers and The Three Servicemen. The men are wearing Vietnam War era uniforms and could be from any branch of the U.S. military at that time.

Interpretations of the work vary widely. Some say the troops have the "thousand yard stare" of combat soldiers. Others say the troops are on patrol and begin looking for their own names as they come upon the Memorial. The lead soldier was modeled after a 21-year-old Marine who was stationed in the Washington, D.C. area in 1983. The soldier carrying the machine gun on his shoulder was modeled after a Mexican-American, and the African-American is a composite of several young men who the sculptor used as models. The bronze sculpture was placed in a grove of trees near the west entrance to The Wall. Despite the earlier controversy, the statue today fittingly complements The Wall.