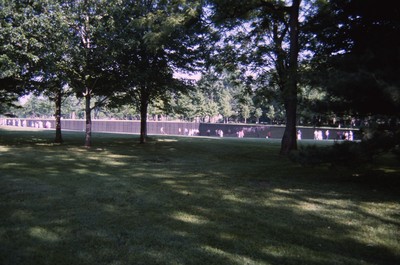 The wall seen in this photo is a memorial to those who served in the Vietnam War. The memorial is located in the Constitution Gardens near the Lincoln Memorial in Washington, D.C. The land was acquired through legislation passed by President Carter. Construction began on the Vietnam Veterans Memorial on March 16, 1982 and was completed in late October of the same year. The project was originally conceived by Vietnam Veterans and supported by the Vietnam Veterans Memorial Fund, Inc. Maya Ying Lin, a Yale University undergraduate, designed the memorial wall. The Gilbane Building Company was responsible for the construction of the site under the direction of architecture firm Cooper-Lecky Partnership.