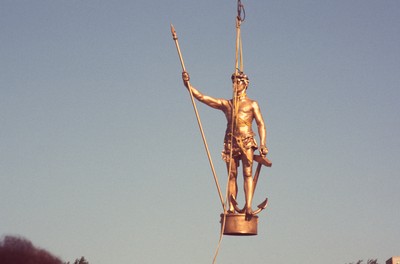 The “Independent Man” was first proposed to be a statue of Roger Williams at the annual meeting of the Rhode Island Historical Society in 1895. The statue, to be placed atop the proposed new State House, was designed by George T. Brewster for $3,000, who called the statue “Hope” and changed the design to fit the Renaissance Revival architecture of the building. The statue has only been taken down once in 1975 for repair and a new coat of gold leaf. It is seen here being returned to it’s proper spot on 20 July 1976.