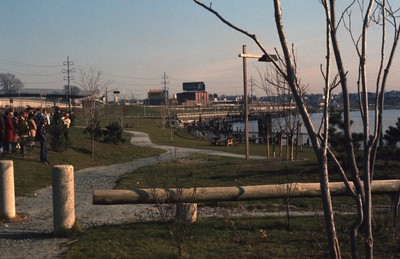 Seen here is a view looking East from India Point Park. In the distance stands the old India Point Park Pedestrian bridge. Originally measuring 8 feet wide, the bridge was built in 1971 and then demolished in 2005 to be reconstructed. It was officially replaced in 2007 by a new $9.5 million bridge measuring 48 feet in width, six times larger than the old structure. The bridge, located on I-195, connects the Fox Point neighborhood on Providence’s East Side to the waterfront at India Point Park.