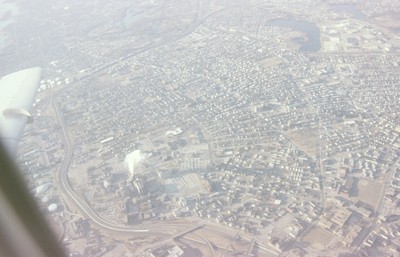 This aerial view looks south west across South Providence and into Cranston. Seen prominantly in the lower left is the Rhode Island Hospital complex, with the Hasbro Children’s Hospital which was only recently completed at the time of the photograph. At the center bottom is the interchange of Interstate 195 and 95, which was relocated in the mid 2000’s. Roger Williams Park, with it’s cluster of lakes is visible at the top center of the frame, with Mashapaug and Spectacle Ponds just west at the top right.