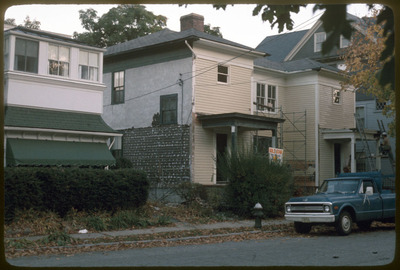 207 Morris Avenue was built by John George McIntosh in 1892, and is known as the John G. McIntosh House. McIntosh purchased the plot of land in 1887 for $10 and built his home on the East Side. The house is pictured on the left of the photo. Unlike many of the Federal Revivalist houses in East Providence, the John G. McIntosh House is categorized as a cottage with a sloping mansard-roof. After its initial construction, it had Queen Anne features added, such as a bay window and a curved oriel window. The mansard-roof is an example of the French Baroque Revivalist style. Taken in approximately 1970, the photo showcases a process of exterior house renovation occurring on the East Side. The house next to the McIntosh House is being stripped of stucco and re-outfitted with siding.