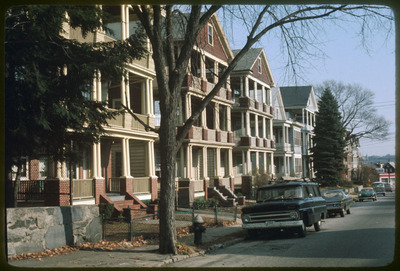 A view of Eaton St. triple-decker houses, just before the intersection of Douglas Avenue (Rt. 7). These houses were, oftentimes, built in groups of three or more and appeared in rows lining street after street. Eventually, the presence of these houses became a cause for concern. They were cheaply built and left little space between buildings causing problems with the efficency of plumbing. As a result of this, the General Committee on Improved Housing in Providence was elected by the Providence Chamber of Commerce in order to fix these issues.