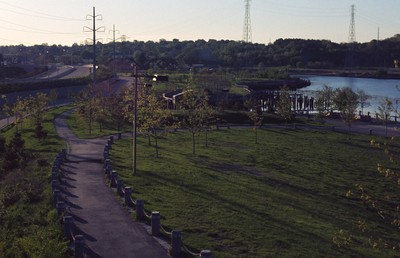 India Point Park features 18 acres of open space, graceful trees, and walking paths along its 3,600-foot shoreline. Located at the confluence of the Seekonk and Providence Rivers where they widen into Narragansett Bay, the Park is the only broad expanse of Bay shoreline in Providence accessible to the public. This park is heavily used and of Providence parks it serves the most diverse population. Groups using it include the Mexican Soccer League, the Cape Verdean Festival, Brown and RISD students, and the Boys and Girls Club of Fox Point, which is the city’s most diverse neighborhood. The Park has undergone in recent years a major landscaping reconstruction intended to increase pedestrian traffic significantly. (date of photograph is approximated)