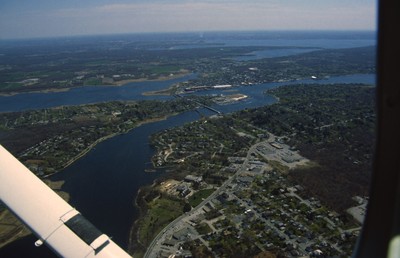 East Providence is a long, narrow, zigzag-shaped town squeezed between the Seekonk River to the west and, to the east, the Ten Mile and Runnins rivers, Barrington has the highest per capita income of any town in the state. The architectural pilgrim who expects from this a precinct of walled estates and grand mansions, however, will be disappointed by the low-key quality of the place overall. They cluster mostly along Narragansett Bay, and especially along Rumstick Road, which takes its name from the neck that separates the mouth of the Warren River from the bay. Yet attractive as many of these houses are, Barrington’s wealthiest clients seem to have played it safe in choosing architects, apparently wanting reassurance more than showiness or distinction.