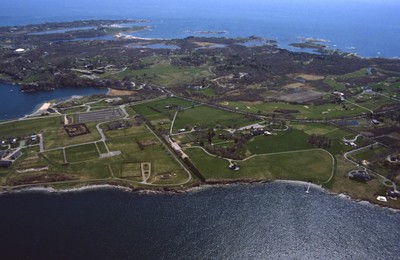 Fort Adams State Park, Ocean Drive, and the town of Newport are pictured in the 1985 aerial photograph. Newport is known for grand summer residences, but those in Benton Point and Fort Adams area, colloquially known as Ocean Drive, have more of a connection to the environment than their Bellevue Avenue contemporaries. Ocean Avenue, which runs along the coast and is known for it's picturesque views of both the ocean and the surrounding countryside which was originally made up of colonial farms. Newport is a city on Aquidneck Island in Newport County, Rhode Island. It is about 30 miles south of Providence. A major 18th century port city, Newport now contains among the highest number of surviving colonial buildings of any city in the United States.