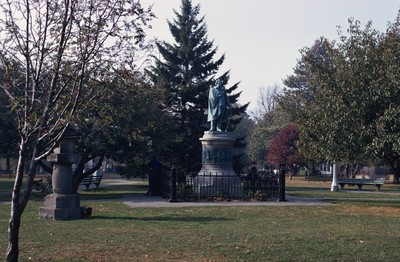 “On March 31 1854 representatives of Japan and the United States signed a historic treaty. A United States naval officer, Commodore Matthew Calbraith Perry [April 10, 1794 – March 4, 1858], negotiated tirelessly for several months with Japanese officials to achieve the goal of opening the doors of trade with Japan. For two centuries, Japanese ports were closed to all but a few Dutch and Chinese traders. The United States hoped Japan would agree to open certain ports so American vessels could begin to trade with the mysterious island kingdom. In addition to interest in the Japanese market, America needed Japanese ports to replenish coal and supplies for the commercial whaling fleet. On July 8,1853 four black ships led by USS Powhatan and commanded by Commodore Matthew Perry, anchored at Edo (Tokyo) Bay. Never before had the Japanese seen ships steaming with smoke. They thought the ships were "giant dragons puffing smoke." They did not know that steamboats existed and were shocked by the number and size of the guns on board the ships. At age 60, Matthew Perry had a long and distinguished naval career. He knew that the mission to Japan would be his most significant accomplishment. He brought a letter from the President of the United States, Millard Fillmore, to the Emperor of Japan. He waited with his armed ships and refused to see any of the lesser dignitaries sent by the Japanese, insisting on dealing only with the highest emissaries of the Emperor. The Japanese government realized that their country was in no position to defend itself against a foreign power, and Japan could not retain its isolation policy without risking war. On March 31, 1854, after weeks of long and tiresome talks, Perry received what he had so dearly worked for -- a treaty with Japan. The treaty provided for: Peace and friendship between the United States and Japan. Opening of two ports to American ships at Shimoda and Hakodate Help for any American ships wrecked on the Japanese coast and protection for shipwrecked persons Permission for American ships to buy supplies, coal, water, and other necessary provisions in Japanese ports. After the signing of the treaty, the Japanese invited the Americans to a feast. The Americans admired the courtesy and politeness of their hosts, and thought very highly of the rich Japanese culture. Commodore Perry broke down barriers that separated Japan from the rest of the world. Today the Japanese celebrate his expedition with annual black ship festivals. Perry lived in Newport, Rhode Island, which also celebrates a Black Ship festival in July. In Perry's honor, Newport has become Shimoda's sister city.” U.S. Navy Museum (see notes).