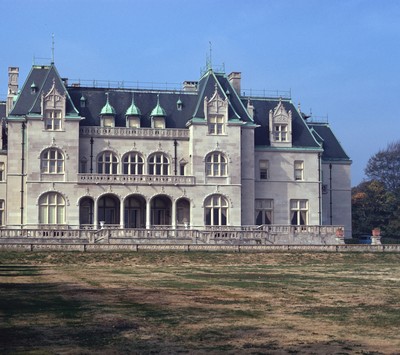 Ochre Court was commissioned by New York real-estate baron Odgen Goulet. It merges Flamboyant Gothic and Italian Renaissance architectural forms in the style of Françcois I. It replaced a formed home, Edgewater (George Champlin Mason, architect), a steep French Mansard that Goulet lived in for six summers before having it razed for the new structure in 1888. In 1947 it was donated to the Sisters of Mercy to serve as a college complex, and later administrative center, for Salve Regina University. This 1971 view shows the structure from its ocean side which features a series of arcaded porch openings that lead to a terrace facing the cliffs and the ocean. Biography: Jordy, William H. "Buildings of Rhode Island" Oxford University Press, 2004. p. 559-560. Yarnall, James L. "Newport through Its Architecture : A History of Styles from Postmedieval to Postmodern." Newport, R.I.: Salve Regina University Press in association with University Press of New England, Hanover and London, 2005. p.69, 133-135.