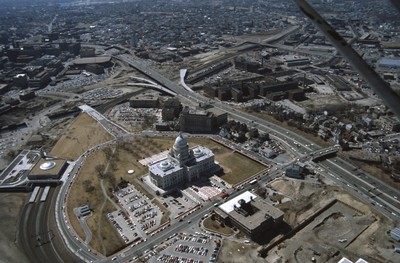 Designed by the architectural firm of McKim, Mead & White and constructed from 1895 to 1904. The building is made up of 327,000 cubic feet of white Georgia marble, 15 million bricks, and 1,309 short tons of iron floor beams. The dome of the State House is the fourth-largest self-supporting marble dome in the world. On top of the dome is a gold-covered bronze statue known as the Independent Man, originally named "Hope." In this picture, Providence Station, an answer to redirect train transportation is underway, completed in 1986.