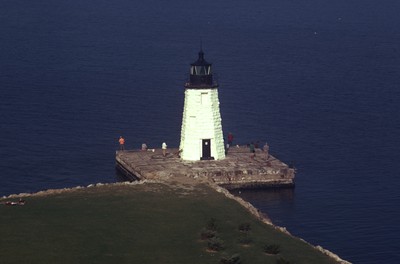 The Newport Harbor Lighthouse may not be the best-known light in Newport Harbor, but its place in history is unchallenged as the first beacon to guide mariners into the bustling Newport of the early 1800s. The lighthouse stands on Goat Island, so named because early Newport residents pastured their goats there, and is known locally as Goat Island Lighthouse. This lighthouse has overseen massive changes to Newport and its harbor over the last two hundred years. Although Newport had been an important center of seaborne commerce since the early 1700s, the first lighthouse on Goat Island at the entrance to Newport Harbor was not completed until 1823. Activated on New Year’s Day of 1824, the stone tower was twenty feet tall with a multi-lamp and reflector combination showing a fixed white light. A nearby keeper’s dwelling had six rooms. The lantern room gave keepers little room to move, being only five feet high and four feet wide. Besides being crowded, the room was damp and ventilation poor, causing the condensation on the lantern glass to often freeze during the winter months.