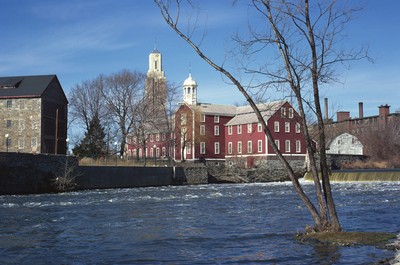 Slater Mill Historic Site, also known as Slater Mill or Old Slater Mill, is located on the Blackstone River in Pawtucket, RI. Slater Mill was built in 1793. The original structure, based on public house designs contemporary to the structure, is now buried within the center of an elongated structure, to which a wing was added in the 19th century, giving the building a "T" shape. The construction of Interstate 95 in the 1960s isolated the mill from the surrounding area and brought it back into public consciousness. A park was added and several of the surrounding structures were demolished, if they weren't already long gone. This photograph shows the mill and the damn shortly after the construction of I-95. Behind the mill complex the modernist Pawtucket City Hall tower can be seen.