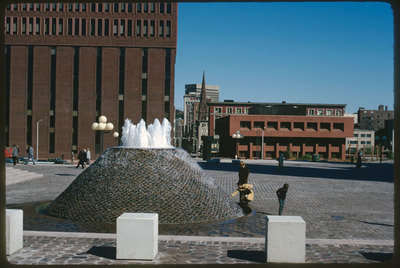 According to Woodward, Cathedral Square is the “most problematic of Providence’s open spaces.” Despite being designed by world class architects and urban planners, namely I.M. Pei and Zion & Breen, the space has been universally decried as an utter failure. Intended to be a marvelous piazza, inspired by European models, the forecourt for Providence’s most monumental and important church, the Cathedral of Saints Peter and Paul,” the square never fulfilled its objective. Whereas European open spaces rely on activity generators (see slide 5151 for map of Providence activity generators) to work, Cathedral Square remains largely empty, except for “a lifeless collection of 800 apartments” and a few “stultifying” and rarely visited structures.”