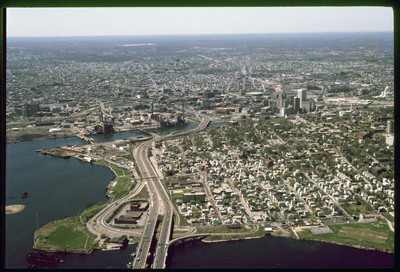 India Point Park is a park in the Fox Point neighborhood of Providence, Rhode Island at the confluence of the Seekonk River and Providence River. The park takes its name from the maritime activity connecting Providence with the East and West Indies. Today’s landscaped park was intensely developed into the twentieth century with wharves, ships’ prisoners, and light industrial use; a hint of its history may be understood by a glance at Fox Point to the west end of the park. Landscape architect Albert Veri provided the plans for the park and development was significantly aided by local landscape advocate Mary Elizabeth Sharpe.