Aerial View of the Capitol 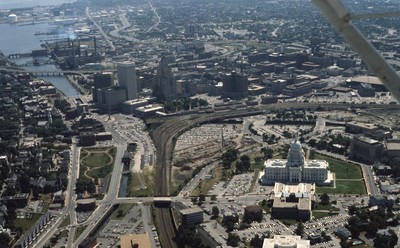 Seen here is an aerial view of the Rhode Island State House in Downtown Providence. The building was designed by McKim, Mead and White between 1892 and 1904. It is located on Smith Street. Also seen in this aerial is the Providence Financial District which consists of the Industrial Trust Co. (1928) and the Rhode Island Hospital Trust Co Building (1917, 1973). The view predates the creation of the Capital Center and the moving of the railway-tracks and the Chinese Wall.