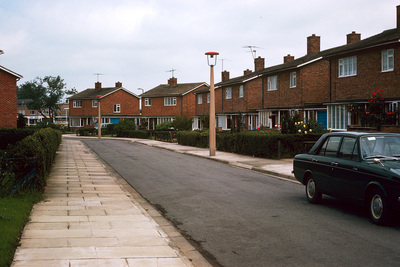 Newton Aycliffe is located in County Durham, England. Newton Aycliffe was founded during the New Town Act of 1946. Newton Aycliffe houses were designed with uniformity in mind. Each came with garage parking and a front-yard garden. A focus in post-war New Towns was social and public housing, reflected in the construction and shape of the neighborhoods shown here.