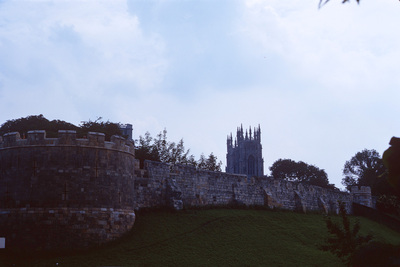 The York City Walls with York Minster in the background. The York City Walls are England's longest still-standing medieval town walls, a 3.4 km (about 2 miles) circuitous route. The walls were built when the Romans founded the city in about 71 A.D. and were the city's main defenses throughout the Viking, Anglo-Saxon, Norman, and Tudor times. While many other cities demolished their walls when their defenses became outdated, York city officials strongly opposed the demolition of the walls in 1800. The walls have been restored and preserved since the mid-1800s onward.