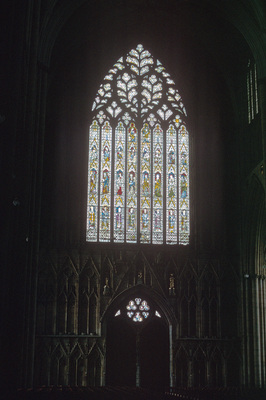 The present Gothic-style church at this location was built between 1220 and 1472. York Minster holds over half of England's medieval stained glass collection in its 128 windows. This photo shows the Great West Window, which dates to the late 1330's and has been called "the heart of Yorkshire" because of the upper stonework's shape. The glass shows the hierarchy of the Church starting with 8 Archbishops of York at the base with the Apostles above them. The Life of Christ and the Virgin Mary are depicted at the top.