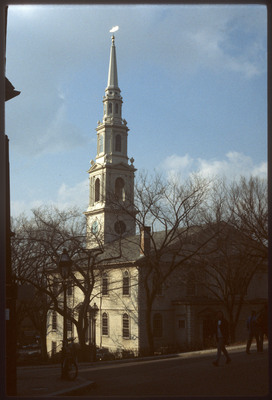 First Baptist Church was founded by Roger Williams in 1638. The building that stands today on North Main Street was built between 1774 and 1775. This building shows Providence’s increasing wealth and power during this time period. John and Joseph Brown were responsible for the design of the church. It is an 80-ft. square building that blends two traditions together: the New England meeting house, and the Anglican parish church. The steeple derives from James Gibb’s 1728 Book of Architecture, Plate 30, an alternative design for St. Martin-in-the-Fields of 1726 in Trafalgar Square, London.