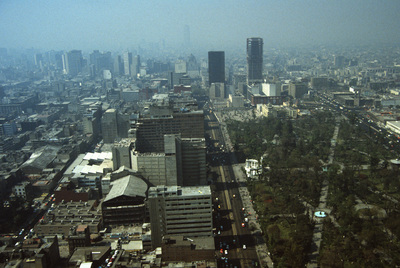 Downtown Mexico City from above. The Alameda Central public park is to the right of the photo. Alameda Central was initially an Aztec marketplace, but was converted in 1592 to a public park. It is popularly referred to as Mexico City's Time Square. It was once a prominent walking place exclusively for the elite and upper-class as it had (and still has) ornate European statues and gas lamps, both of which were not common in Mexico City, but eventually became more open to all classes and peoples.