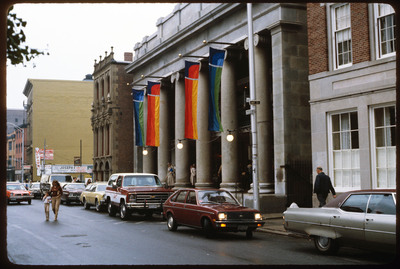 The Westminster Street end of the Providence Arcade (1828) by Russell Warren and James Bucklin and built for Cyrus Butler. Also known as “Butler’s Folly.” Derived ultimately from the Burlington Arcade of 1818 in London, which influenced two new world Arcades in New York and Philadelphia in the early 1820s, the Providence Arcade has always suffered from lack of occupancy. In the interior, three levels of shops are united by a glass roof and classical details.