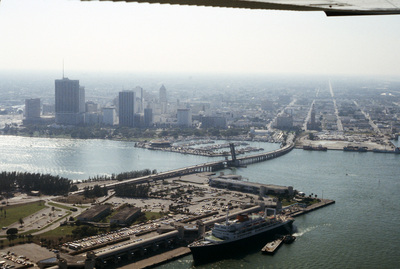 Aerial image of the Dante B. Fascell Port of Miami, a seaport in Biscayne Bay. It is connected to Downtown Miami by Port Boulevard, a causeway over the Intracoastal Waterway. Officially established by a name of porthood in 1960, the port has been of use since its semi-natural creation in an 1835 hurricane, and unnatural extension of railroads to the area.