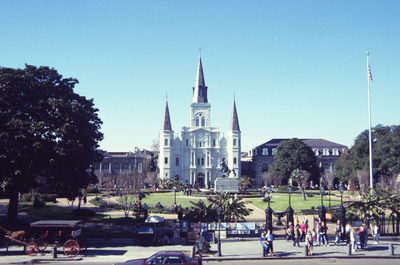 Jackson Square is a historic park in the French quarter of New Orleans designed after the famous 17th century Place des Vosges in Paris, France by the architect Louis H. Pilié. The site is popular for the equestrian statue of Andrew Jackson, the location where Louisiana was made United States territory through the Louisiana Purchase, and three 18th-century historic buildings; the St. Louis Cathedral, the Cabildo, and the Presbytère