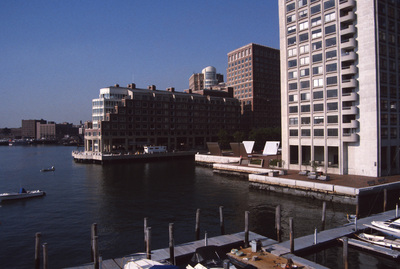 Rowes Wharf is a waterfront development that was once a neighborhood known as South Battery. In 1764, Boston merchant and property owner John Rowe bought the land and built the first Rowes Wharf which extended slightly into the Boston Harbor and was used mainly for industrial water traffic. Rowes Wharf is a 5.38 acre site located in Boston's Seaport District. This photo was taken after the addition of the Boston Harbor Hotel in 1987. NOTES: USE: HEROIC: Concrete Architecture and the New Boston for information