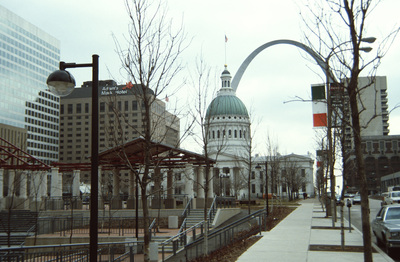 The Old St. Louis County Courthouse was built in 1828 and featured several significant trials, including the Dred Scott vs. Sanford case, and the Virginia Louisa Minor case for women's suffrage. In 1940, the city of St. Louis gave the Courthouse over to the Federal Government who then created the Jefferson National Expansion Memorial Park. The Park also features the Gateway Arch, designed by architect Eero Saarinen and built in 1965. The Gateway Arch reflects St. Louis' role in the Westward Expansion of the United States during the 19th century.