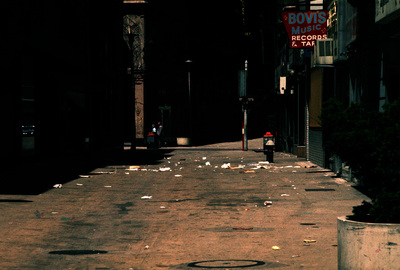 During the 1960s Providence closed Westminster Street and some of its intersecting streets, including Union Street (pictured here) to automobile traffic. This photo illustrates the liter and pollution problem in Providence during the late 20th century. The building at the left was later demolished and made into public space. Bovi's Records was an independent record store, owned by Bob Bovi, a contributor to the music scene in Providence in the 70s. See Smolski Op-ed "Providence is the 'dirtiest city of them all,' from November 11, 1974: http://digitalcommons.ric.edu/smolski_text/67/