Aerial of Providence over Seekonk River 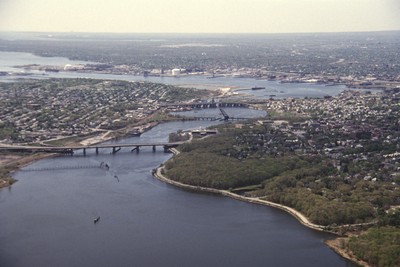 This aerial shows the city of Providence over the Seekonk River, as well as the bridges that cross this river. The Seekonk River begins where the Blackstone River reaches sea level, which is just under Pawtucket Falls. From here, the river flows south between Providence and East Providence eventually flowing into the Providence River between Bold and India Point. Also seen here is the Henderson Bridge which connects the cities of Providence and East Providence. Originally opened in 1969, it was built to replace the old Red Bridge. The Henderson Bridge was named after its designer George Henderson from Rumford, RI. Also seen here is the Crook Point Bascule Bridge or the Seekonk River Drawbridge. Built in 1908, this bridge provided connection to the old Union Station along the New York, New Haven and Hartford Railroad line. This bridge was abandoned in 1976 and it is known to nearby residents as the "Stuck-Up Bridge" for its stuck up open position and has become somewhat of a local icon of urban decay.